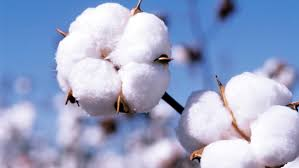 Cotton has been used in textile production for 1000s of years and used in providing thousands of products like apparel, but even gunpowder. The US, India and China produce over 65% of cotton used by citizens of the world. A bale of cotton weighs about 500 lbs and can produce over 1000 T-shirts. Harvesting cotton begins in July until late November and is grown in about 15 states such as, but not limited to North Carolina, South Carolina, Tennessee and Virginia.

Georgia produces about
20% of cotton in the US, which is also its leading crop. The climate and
environment in Georgia facilitate the high-quality cotton growth which textile
mills worldwide desire.

In 2018, President Trump
put tariffs on Chinese goods coming into the United States earlier this year,
and the Chinese retaliated. The US is the top producer and exporter of soybeans
with China purchasing about 25% of what the US produces U.S. annual soybean
crop.  China is the largest importer of
soybeans in the world.  However, China
has canceled all shipment of beans from the U.S. causing the prices in the
soybean futures market to drop to the lowest price in a decade.

So what did farmers do, at least those located in the Southeast region of the US, they planted more and more cotton?

Recently on AgDay TV, Tyne Morgan spoke with David Hudson, an economist at Texas Tech University, about the trade war’s impact on cotton.

He says increased acres are part of that equation.

“As soybean prices fell more acres shifted over to cotton in year two and so now we’re seeing the effects in year two of this pretty substantial drop in cotton price,” says Hudson. “That is a trade effect, but it’s a delayed effect.”

Hudson even the strong MFP payments for cotton won’t be enough to offset falling prices in 2019.

“We’re talking about nearly a 40% decline in prices, year over year,” says Hudson.

So where is the price of cotton going next, the chart suggests to short at the monthly supply at $67.50.

There is a monthly demand down at $43.

But the chart suggests your first target should be at major/resistance band at $57.50.