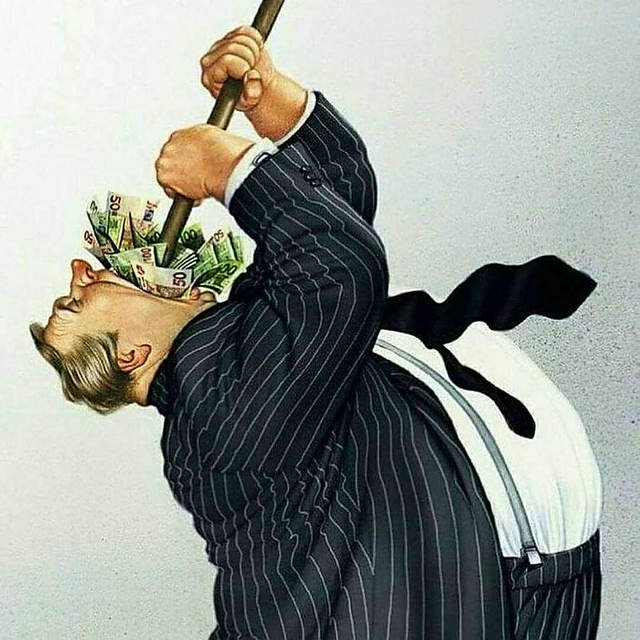 Lately ive been thinking about the token distribution happening on STEEM and WHALESHARES.
For those that had an opportunity to read my thoughts on the current state of things know my position on what is happening right now on both platforms.
The biggest issue (outside development related things) both platforms are facing at this moment is pure, unchallenged greed or what you can call token accumulation maximization.
If i didnt call this “greed” and use a negative term for what is happening, most folks wouldnt see this as a bad thing. Thats mostly due to the topic being too broad.

The problem of greed we are facing basically means that the reward pool is tilted greatly on the side of maximizing accumulation.

So why is that bad?

Well for one it has a negative impact on the general sentiment on what is supposed to be a social media token redistribution platform, and it destroys what we call “proof of brain”.

Folks that did an analysis as to what percentage of the newly created STEEM goes to bots they came to a number of around 20%. Add to that upvote selling services, add selfvoting and circle jerks and you will get to a number indicative of the relation between accumulation and distribution.
How much of the inflation creating potential of SP holders returns right back to the pocket of those same SP holders.
I dont have the stats, but i think its fair to assume that its more then 51%.

Not only is this bad for the general sentiment, but its bad because by having poor distribution that also reduces the earning potential for new users which leads to diminished demand for the token.
What does that make of STEEM?
@acidyo wrote a post the other day about how great it will be once we have a million accounts with $1 upvotes supporting their creator of choice..

My question to that is:

If the token distribution is happening in the way it is right now, with tokens created going right back to the creators in percentages of 50%,60%,70%, 80%.., the inflation reducing every year, how will there ever exist such a middle class here?

What if with that the STEEM price goes up? Who is going to pay 10$ for a STEEM token to potentially get a fraction of a fraction of the tokens that are not going right back to the pockets of selfvoters, circle jerks, bots, vote sellers?

So really, why have upvotes anyways? Why have content? Why not just get rid of all that and simply pay out 100% of the upvote token amount back to the SP holder?

We all know fair well why.

Ill see you around. 😉