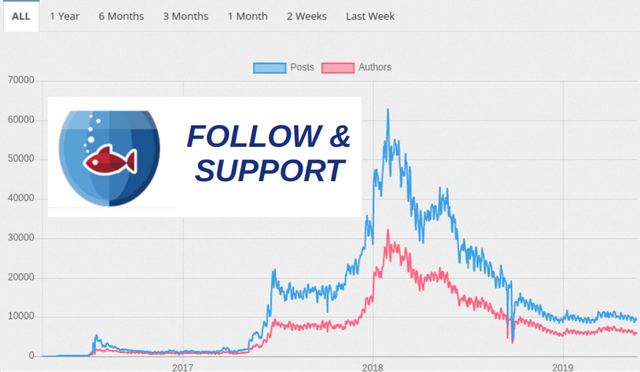 Still no important change regarding activity in the STEEM Blockchain…The number of active steemians keeps going down despite a little recovery experimented one month ago.

Anyway, I am fully confident it is a question of time that we will see the recovery of the activity… I think we are very dependant on the market conditions… if the market keeps growing, we will see a massive entry of newcomers and also people who has left trying to join again in the platform .

Last week I was pleased to have found a new steemian to follow straightly since her very first post, her name is @anaclark and I think she has a lot of talent for writing and describe her thoughts…

She wrote another great post which had not the great success as her first one had, anyway, I invite you to read it:

“This is My Little Ki”

@anaclarck started at steem as many others, with very poor Steem Power… actually, she run out of Resources Credits very rapidly while trying to reply some comments that she gets at one of her posts… one of the comments was mine…and she replied later on, telling that she was run out of SP…

I decided to delegate some SP to her so she can have some RC in order to interact more frequently.

Hope people like @anaclarck will find its way and remain here.

This week I am going to keep my @steembasicincome shares again to @marenontherun and @mrhill , and I am also adding one exceptional runner to the “party”, he is @king-cobra and he is at the doors of becoming Minnow as well so I think he can be a very good candidate for @steevc initiative #tenKminnows .

“Running is my life” , it is an old post but a very good one.