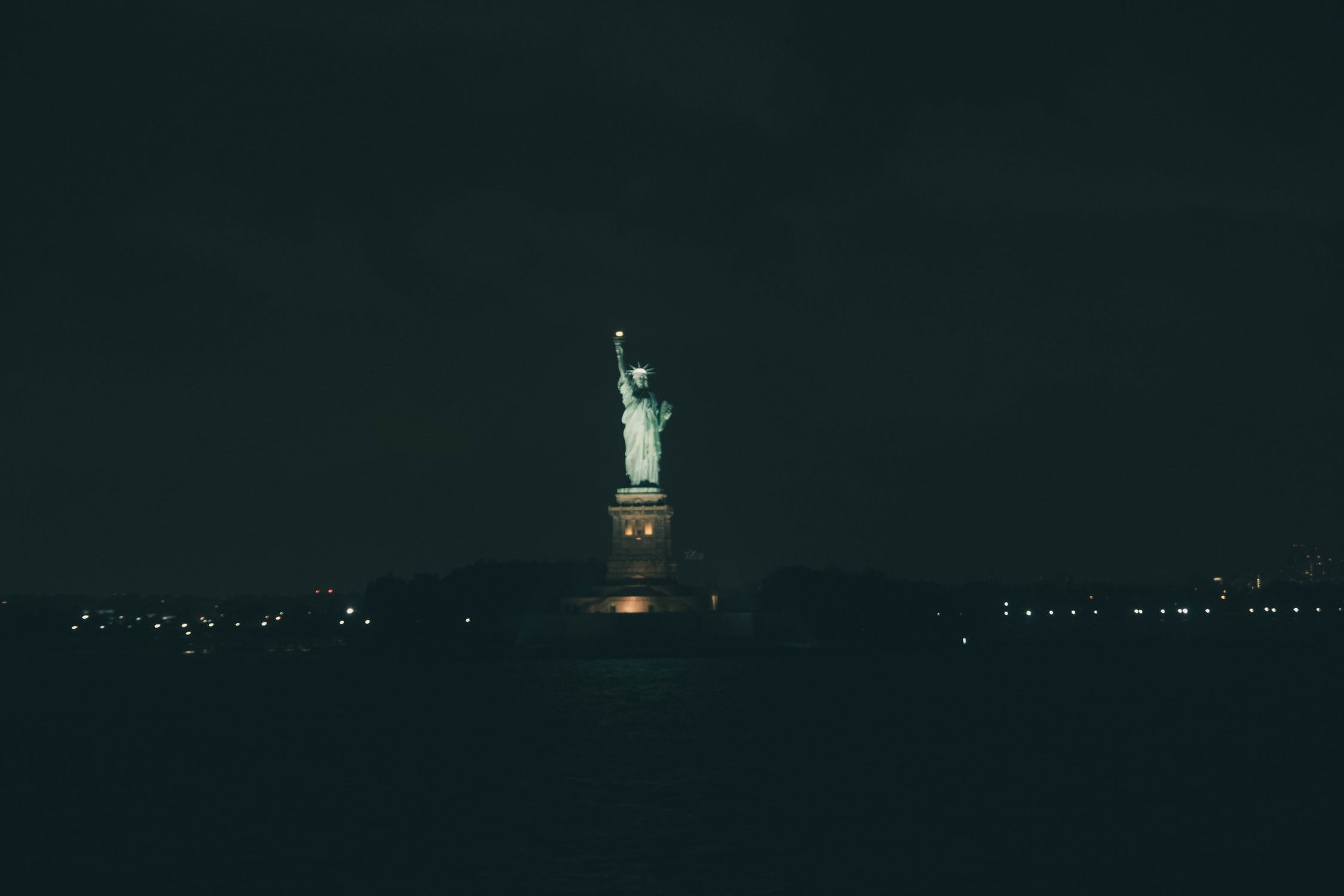 Yesterday I mentioned that I would probably have to say a few words about Trump’s attitude towards Bitcoin.

Trump’s recent Tweets have clearly shown where he stands on the topic of cryptocurrencies: 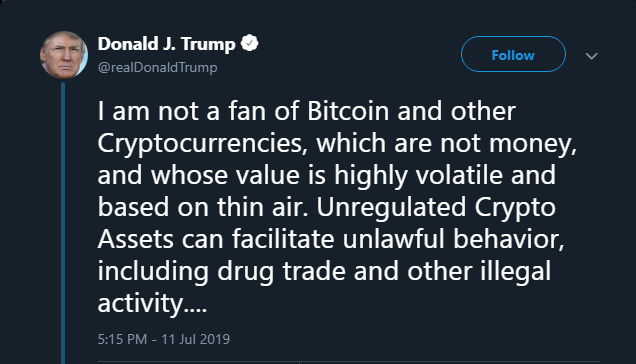 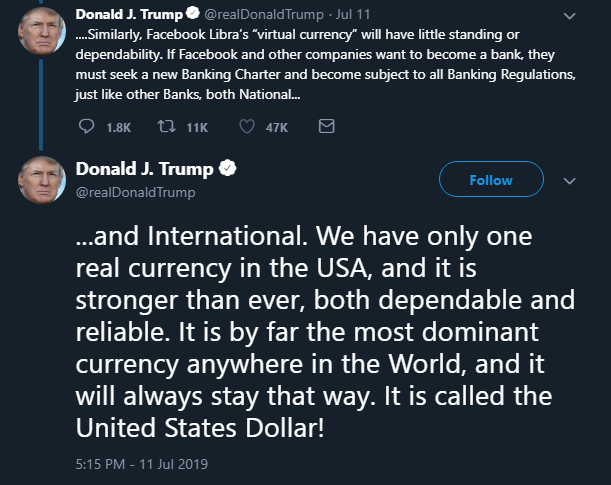 His pro-fiat bias is as obvious as it is expected: from a man who has great fiat wealth, I wouldn’t expect any less.

Of course his anti-crypto arguments are the typical drivel: he creates the “unlawful behaviour” strawman, which he then burns using the drug trade. It’s a classic logical fallacy. The internet is littered with pictures such as this one:

News flash Cupcake – that’s not Bitcoin – that’s your good ol’ USD – you know, the same anonymous currency that drug lords have been stockpiling for decades:

That particular barrel of Dollars is said to have once been Pablo Escobar’s. Speaking of Escobar and US Dollars:

“Escobar had so much cash coming in that his monthly bill for the rubber bands he used to hold the stacks of banknotes together was $2,500.”

“Escobar had so much money that he once burned $2 million in crisp banknotes just to keep his family warm when they were on the run.”

I could easily continue to pick fiat apart and show just how STUPID Trump’s tweets really are, but that’s been done before. I could also state the positive side of Trump Tweeting about Bitcoin, about how he is now lending legitimacy to crypto and showing that it is indeed a major player in the future of global finance; but that’s also not my objective today. I don’t want to re-invent the well or derail my own post, so instead I’m going to refer you to this Coindesk post: “What Trump’s Bitcoin Tweet Changes”, which I thoroughly enjoyed reading and which I mostly agree with.

No, today I want to talk about what Trump is standing against here: the liberty of his very own people.

“Give me your tired, your poor, Your huddled masses yearning to breathe free…”
~  A poem by Emma Lazarus on a plaque on the Statue of Liberty

Crypto IS Freedom. Crypto IS Liberty!

Crypto is the right to choose what money you want to use. Crypto is your way of saying “No thank you, I don’t want to be forced to enrich the rich at my own expense, I have the right to choose something else.” But Trump doesn’t like it, because it doesn’t make people like him rich, it doesn’t boost the US dollar – so he stands against it. Politicians generally care about only two things: money and power – even a non-standard politician like Trump is not immune to that.

But who am I? I’m just a random, anonymous internet guy. What do I know about politics? What do I know about true patriotism and what it means to fight for your country? Who am I to criticise the US president and say that he is being selfish, anti-liberty and unpatriotic? Well… I’m the best brain on the planet – but unfortunately a rather unknown one. So instead of using my own words, I’m going to borrow the words of others for the rest of this post. Let’s see what those a little more famous than I have to say on this topic:

Ruling by the Nazi playbook – Lessons taught by Joseph Goebbels

For those of you who may not know, Joseph Goebbels was an instrumental part of Hitler’s strategy. Goebbels was a Nazi who headed the “Reich Ministry of Public Enlightenment and Propaganda”  (German: Reichsministerium für Volksaufklärung und Propaganda) from its establishment in 1933 to its dissolution in 1945. Its purpose was to “centralise Nazi control of all aspects of German cultural and intellectual life.” (Wikipedia) Goebbels was obviously an evil, hateful and tyrannical fascist of the highest order, but he was no fool.

Goebbels was the original authority on propaganda, it was the method he chose to control the minds of the German public during and prior to World War II. Sadly, it seems as if history is doomed to repeat itself, as history always does.

It is common to hear politicians get called “fascists” or “Nazis”, you can see it in the media or social media every day. Perhaps if people realised just how close such comments are to the truth, then they might pay them more attention..

Let’s take a look at some of Goebbels’ many quotes on the subject, see if any of these sound familiar…

There was no point in seeking to convert the intellectuals. For intellectuals would never be converted and would anyway always yield to the stronger, and this will always be “the man in the street.” Arguments must therefore be crude, clear and forcible, and appeal to emotions and instincts, not the intellect. Truth was unimportant and entirely subordinate to tactics and psychology.

Goebbels said that you can just ignore those clever enough to see the truth, and rather appeal to the emotions of the less educated masses. After all, he also stated that:

…the rank and file are usually much more primitive than we imagine. Propaganda must therefore always be essentially simple and repetitious.

The goal of propaganda is to achieve total and lasting control of the population:

The essence of propaganda consists in winning people over to an idea so sincerely, so vitally, that in the end they succumb to it utterly and can never escape from it.

This is the secret of propaganda: Those who are to be persuaded by it should be completely immersed in the ideas of the propaganda, without ever noticing that they are being immersed in it.

…or worse still, they believe that they are free, yet they are not:

Propaganda works best when those who are being manipulated are confident they are acting on their own free will.

Goebbels knew that he had to win over the majority of the people in order for Hitler’s idea of a Nazi dictatorship to succeed:

And once in control, he had to steer their thoughts and minds: (As I have told you many times in my own posts such as this one.)

He knew that people don’t care to interrogate information presented to them, because they are beings of emotion. Nothing has changed in this regard and it is how the fiat money which makes everybody poorer continues to rule the world today:

If you tell a lie long enough, it becomes the truth.

The English follow the principle that when one lies, it should be a big lie, and one should stick to it.

Goebbels also knew that Representative Democracies – such as those which most Western nations still use today – are easy to corrupt. Of course these days there are almost no good people left in politics at all – our Democracies have been completely hijacked by those who seek to control us for their own purposes:

We enter parliament in order to supply ourselves, in the arsenal of democracy, with its own weapons. If democracy is so stupid as to give us free tickets and salaries for this bear’s work, that is its affair. We do not come as friends, nor even as neutrals. We come as enemies. As the wolf bursts into the flock, so we come.

These days we can clearly see how, in the name of the sacred cow named “Democracy”, many of our once proud nations are decaying into socialism. Venezuela is also a Democracy. So is Zimbabwe. Remember that.

To be a socialist is to submit the I to the thou; socialism is sacrificing the individual to the whole.

Goebbels told us how, once in power, the evil entities of government would never relinquish that power willingly. Again, look at Venezuela and Zimbabwe.

If we have power, we’ll never give it up again unless we’re carried out of our offices as corpses

And while it wasn’t the major driver of his time, he knew that money is the nefarious driving force behind almost all the evils of the world.

The money pigs of capitalist democracy: Money has made slaves of us. Money is the curse of mankind. It smothers the seed of everything great and good. Every penny is sticky with sweat and blood.

Once he had succeeded in building the power which the Nazis required, Goebbels stated that:

We have made the Reich by propaganda

Further confirming that politicians will say whatever they need to to get what they want.

It is clear to me today that our so-called leaders are using Goebbels’ tactics to control the populations of our world. They may not wear swastikas on their arms, but they are fascist Nazis all the same!

There IS a very good chance that crypto could bring their whole world tumbling down. They KNOW it and it’s why they are putting up so much resistance to it. It has caught them off guard and they haven’t managed to formulate a proper response to it. They missed the bus when it came to controlling it, and now it threatens their very power-base. It is for this reason that I strongly support and promote crypto. It is for this reason that I despise rubbish like Libra, XRP or JPM coin or other fake “cryptos” – those exist to serve bankers and large corporations – the people pulling the strings of the puppets.

There IS hope for our crypto-based future and if we stand by it we CAN defeat the current powers-that-be. Goebbels said it himself:

There will come a day, when all the lies will collapse under their own weight, and truth will again triumph.

I’m not done yet, far from it! That was only the “Goebbels part” of my argument. I have much more in store for you: many more great words said by men and woman a lot less evil than what Joseph Goebbels was!

I’ll be sharing those with you in Part 2, so stay tuned and hear what the good guys have to say!