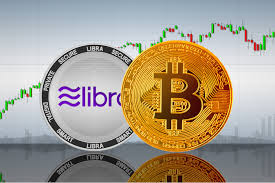 It seemed when Facebook announced their own cryptocurrency, Libra…Bitcoin took off going from about $10k to $14k.   Libra is designed on paper to be an alternative to traditional financial services for the billions of people worldwide who lack access to banking through a digital wall.

However, the announcement really scared the government because of the potential of fiat being the beginning of the end.

Over the past two weeks, Facebook has received a wave of criticism from the likes of the Federal Reserve Chair, the House Financial Services Committee, the Treasury Secretary, the Senate Banking Committee, and even the President himself. While Libra’s bright future has turned darker, or at least delayed, Bitcoin’s present is back in the red.

From Senators questioning the age-old privacy problem of Facebook to calling Libra outright delusional, they reigned down on David Marcus, lead of the Libra Project and VP of Messaging Products at Facebook. The aging US lawmakers were concerned about Libra’s plan to overhaul national currencies and manipulate monetary policies, and with the “massive reach” of Facebook, that prospect looks even more menacing.

After Steve Mnuchin, the Treasury Secretary descended on the cryptocurrency market, the price shaved over $500. As the Senate hearing began, the price dropped by over $1,000 in less than 2 hours, to $9,500.

Bitcoin now finds itself around $9400 and within the daily demand zone at $9200.

So is Libra and Bitcoin correlated, for now it appears they are correlated.  However, Libra is a medium-of-exchange where users can send money and house transactions, while Bitcoin has become a store-of-value, digital gold.  And because of this, Bitcoin is giving folks an opportunity to buy on a pull back to one of the daily demand zones before eventually moving higher. I personally like the $8000 level better than the $9200 level.