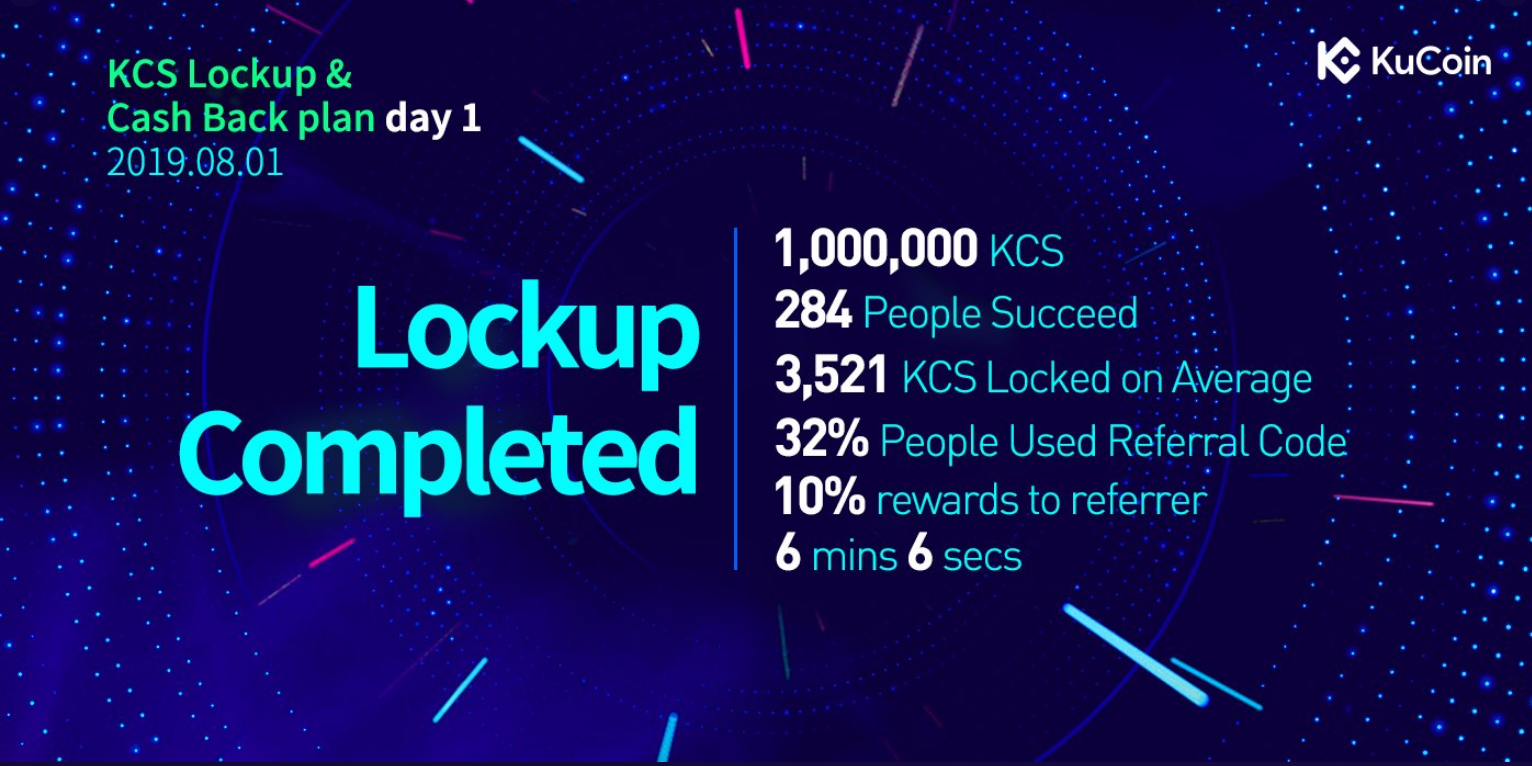 I wrote about the new KuCoin staking plan on Tuesday. This post explained it: “Don’t miss this one!”

True to my word:

I fully intend to lock up my KCS for this period, and I will do so as soon as I can.

Of course, there were problems…

I would be lying if I said I wasn’t surprised. Secretly, I had been expecting some sort of issue, even though I have great faith in the KuCoin team. Blockchain tech is just still all so new; because of this, platforms often forget to take something into account and fail under heavy loads or unusual conditions. This is exactly what happened to KuCoin.

The second that the staking contract opened, it failed. I hopped onto the various social media channels and watched the ensuing chaos for the first few minutes. To their credit, KuCoin were quick to respond. I saw multiple KuCoin admins respond on the telegram channel within minutes.

It turns out that a large block of simultaneous API calls (to lock KCS tokens) had triggered a safety system in KuCoin’s software. From a geek point of view, this is interesting: I have been wondering what safety systems KuCoin has in place – for obvious reasons these are not openly published. I guess we just found one! The safety system shut off the locking contract and had to be reset and disabled for these particular KCS withdrawals. The delay took about 20 minutes to rectify, after which KuCoin announced that they would retry launching the staking procedure 20 minutes later.

KuCoin did a good job of keeping us informed, even replying to my personal thread on Twitter where I and another investor were discussing the issue:

To make up for the problem, KuCoin made the decision to double the maximum total amount of tokens that could be locked on Day 1. The daily cutoff for locking is 500 000 KCS, with a limit of 10 000 KCS per person. KuCoin raised the total to 1 000 000 KCS for Day 1 – which is about the best that they could do at short notice without unfairly disadvantaging those who had been waiting. TAKE NOTE: the 1 000 000 KCS limit was reached well before the 10 minute mark! In fact it took only 6 minutes and 6 seconds before the limit was reached – despite it having been doubled.

What to do and what to expect:

There were not a lot of explanatory posts about the KCS lockup process before it happened. I know of only two that KuCoin released themselves. Because of this, I had a few unanswered questions at lockup time – things I was unsure of. I decided to write this post to try to help you with any questions that you may have about the process, and to guide you through those bits of it which are not immediately obvious.

Firstly – the address to use for the lockup is exactly what they say in their blog post: LOCKKCS. “LOCKKCS” is what you type into the “Wallet Address” field (as seen in the image below).

Trying to transact when the contract is closed will look something like this:

Once the contract is open, refresh the page and the error message should be gone. Remember that you must lock a minimum of 200 KCS at a time. Also remember that KuCoin has a lot of checks and balances when you withdraw (depending on your account security settings). For me this meant the usual ritual of keying in my KuCoin trading code, my 2FA code and a code which is emailed to me. Don’t forget about all that, it adds at least 30 seconds onto your precious time, so be prepared before the contract goes live: have your apps and webpages open and get ready to type/click fast and accurately. In reality, you probably have at least 5 minutes in which to to this – a time which should grow longer each day.

If you manage to beat the rush and lock successfully, then you will see that you have an “in progress” transaction in the “Withdrawal history” section at the bottom of the page.

The “Remark” section caught me a little off guard. With less than a minute to go before unlocking, somebody on Telegram asked about using referral codes for the lockup (as was briefly mentioned in a KuCoin blog post). With literally seconds before the lockup went live, an admin replied that you put the referral codes in the remarks field. Having no other referral code at hand, and not knowing whether it was mandatory or not, and with the admin already swamped with questions, I hurriedly put my own code in the field, just to ensure that all fields were complete and that my transaction wouldn’t get automatically declined and miss the lockup.

No, I’m pretty sure that you can’t self-refer and that I won’t score anything extra by doing this!

I honestly do not know for sure if a referral code is mandatory, I highly doubt that it is. If you want to be a nice person, please use my referral code for locking. I will get extra lockup rewards if you do (which I could really use!). You type it into the “Remark” block. My referral code is E39MoQ

After the problems of the first round, APIs will no longer be able to conduct lockups. Aside from causing problems with the contract, according to https://twitter.com/KuCoinUpdates:

To ensure a fair and equitable KCS lockup program for all of our users, KuCoin will prohibit the use of API to withdraw KCS to the LOCKKCS lockup address. This has taken effect immediately and will continue through the end of the lockup period.

It’s a good decision – it’s fair and it was suggested by a large number of users on Telegram when the first lockup stalled.

Be aware that after you have locked your tokens, you will no longer see them in your KuCoin account. Don’t panic, they will be back (automatically) in three months time – with interest! Also, there is no Lockup Dashboard yet, the only indication of your lockup at this stage is your withdrawal history. Similarly, do not panic if you click on the Etherscan link to your lockup transaction and you see something funny. After lockup your withdrawal page should look something like this:

If you click “view transaction” (as highlighted above) you will see a message such as this one:

That is perfectly normal. The LOCKKCS address is not a regular Ethereum address, it is an internal KuCoin construct. The transaction does not go onto the Ethereum blockchain and will not appear there, so Etherscan is supposed to return an error message. This was confirmed by KuCoin technical staff and the Etherscan screenshot above is from my own lockup transaction.

Note that despite the double allowance, only 286 people managed to lock in round one, I therefore consider myself to be extremely lucky! However, if you missed out, then don’t worry! The rate you can get by locking today is only very slightly less, you’ll still score about a 10% ROI within only three months by locking your tokens! The average amount of KCS locked per person yesterday was 3521 – which I consider to be quite a lot (certainly way more than I own!) With amounts like that being deposited, don’t expect the contract to stay open for long for at least the first few days of locking. I tell you again: be ready and waiting on the dot of 16:00 UTC!

Despite the teething issues, I want to say well done to KuCoin. I think they did a damn good job of handling the API issue in a rapid, fair and responsible manner – about the best they could have done under the circumstances. I don’t blame them for the issue either, it would have been nice if it had been picked up before the time and prevented, but that’s very easy for me to say after the fact, and hindsight is always 20/20. Just as I think Binance handled their hack very well, it’s good to see the intelligent and levelled-headed folk at KuCoin able to do the same under pressure. Such incidents are potential PR disasters if not handled correctly. I don’t see how KuCoin could have handled it any better, their Tweet on my own Twitter wall being a prime example of the lengths they went to to inform and to ease tensions.

In other news: I have recently heard that KuCoin are busy with a “dust” feature such as Binance has (great idea in the first place – well done Binance!) whereby small balances of other tokens held on KuCoin will be able to get “dusted” into KuCoin Shares. It should be released with their next platform update, I look forward to this!

Also, for those of you amateur videographers out there, KuCoin is running a video creation competition with 50 KCS up for grabs. Check their Twitter feed for the link.

Out of interest: I decided to shift my small Tron holdings from Binance to KuCoin two days ago. I’m pleased to report that the fully automatic staking contract is working and that I have already earned my first daily “soft staking” rewards.

Now if KuCoin could kindly please stop releasing awesome features all the time, then perhaps I could go a week without blogging about them! That would make a nice change!