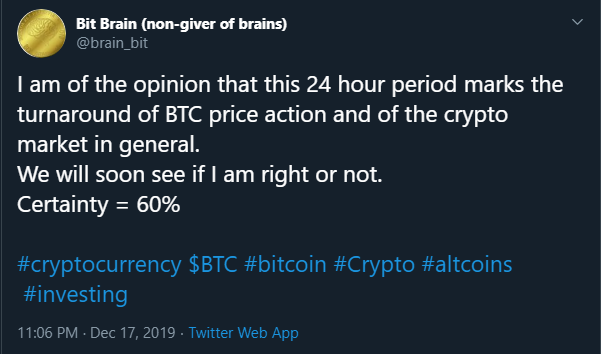 Yes I am still alive. (Sorry to disappoint you politicians, mass media journalists, bankers and other scum – you don’t get off the hook that easily!)

My recent silence has not been voluntary, unfortunately I am once again looking after an injured wife. Sadly this takes up the majority of my time, but now that she is slowly on the mend, I will try to get
back to my neglected blogging.

Let’s take a holistic view of the markets, looking at Bitcoin in particular but also at a few related events/issues/etc.

The year started with a bang – a literal bang if your name is (was) General Soleimani of the Iranian Revolutionary Guard Corps. Let us pause for a moment on this single issue, because the ramifications of that attack are potentially far-reaching. I’m not going to go into whether the attack was justified or not, what Iran did to deserve it etc – go down that path and you get lost in the nitty gritty – that I will leave up to you to decide for yourselves. Since this post is more about BTC than about how the world works, I’ll skip the detailed political/military/economic analysis and will merely mention the high level interesting effects that I think this attack has brought to light.

Bit Brainian thoughts to ponder over:

The post mentioned above was published on 16 December and I haven’t actually needed to update you since then, because that post has been right on the money ever since. Let’s recap a little and see what’s happening now.

16 hours after Tweeting that, the price of BTC hit a seven month low and turned (generally) positive. The prediction was based on a triple-line convergence point, the details of which may be found in “Bitcoin – Approaching 2020” and which remain valid.

It must be mentioned that THE BITCOIN PRICE TURNAROUND HAS YET TO BE CONFIRMED!

Until BTC has conclusively broken through the top of the descending channel, the scenario that BTC may continue to trend downwards remains. I BELIEVE that the price movement of BTC (and of crypto in general) has now turned around, but at this stage I am still willing to concede that I may be mistaken – though the evidence suggests that I am not.

To break out of the channel, BTC will have to break through the red zone depicted on the chart below.

Note in the chart above that BTC price is currently well above my projected price line (yellow), so (as I said earlier) don’t panic if the FUD-based buying comes to an abrupt halt and the price drops into the mid $7000s.

On the other hand, this buying spree and obvious faith placed in BTC as a store-of-value may well trigger another bull run and send crypto prices to new ATHs. At this stage we can’t tell what will happen yet, so just keep calm and take it day by day, remembering that crypto investing is a long-term game.

The performance of altcoins in 2020 suggests that crypto sentiment has indeed swung positive. Those who didn’t pick up alts in December (or earlier) may have missed the best opportunity to do so, though seen in the greater scheme of things altcoins are still ridiculously cheap and are well worth buying! Just remember that many altcoins are utter rubbish (even some big name alts, hey XRP? Hey BSV?), so choose carefully. Sure, the price of the bad coins will probably Moon when the other alts do, but so did the price of BitConnect once upon a time…

With the apparent change in sentiment, I have begun constructing new positive Fib levels (as opposed to the negative ones I was using in the descending channel – as seen above). These are still in the test phase and will require considerable tuning before they start to yield information worthy of “prediction value”. For what it’s worth, my positive Fib levels look like this for now:

I will probably keep the positive Fib levels away from my primary BTC chart for the time being, until such a time as I have confirmed that the descending channel is no longer governing BTC’s price movement. Adding too much data to a chart just becomes confusing and is undesirable, the fewer lines there are on a chart, the more I can see.

As described in my older posts, I expect BTC to now hover just above my Long-term Base Trendline for the foreseeable future – probably most of 2020. At some stage (or possibly stages) BTC will rise sharply up from that line and we will have another bull market – probably an unbelievably strong record-breaking one. Maybe it won’t be one big one, but rather a series of smaller bull runs, much like the mini-run we saw in mid-2019.

Whatever the outcome, I remain more bullish on BTC than ever before. I’m a long-term investor, when I buy something I’m looking at least five years into the future, more likely a decade or longer. I got into crypto because I saw the long-term potential of decentralised blockchain technology, a potential which will surely be realised.

Remember that crypto is only a part of a balanced portfolio. I believe that crypto is very important, but I also believe in not putting all one’s eggs in one basket. You can, for example, be a fan of both Bitcoin AND Gold, or even Bitcoin and Stocks – don’t let short-sighted fools like Schiff of Buffett polarise your views.

I wish you all a merry 2020, and I look forward to interacting with all of you wonderful blockchain-friendly visionaries over the course of the year.