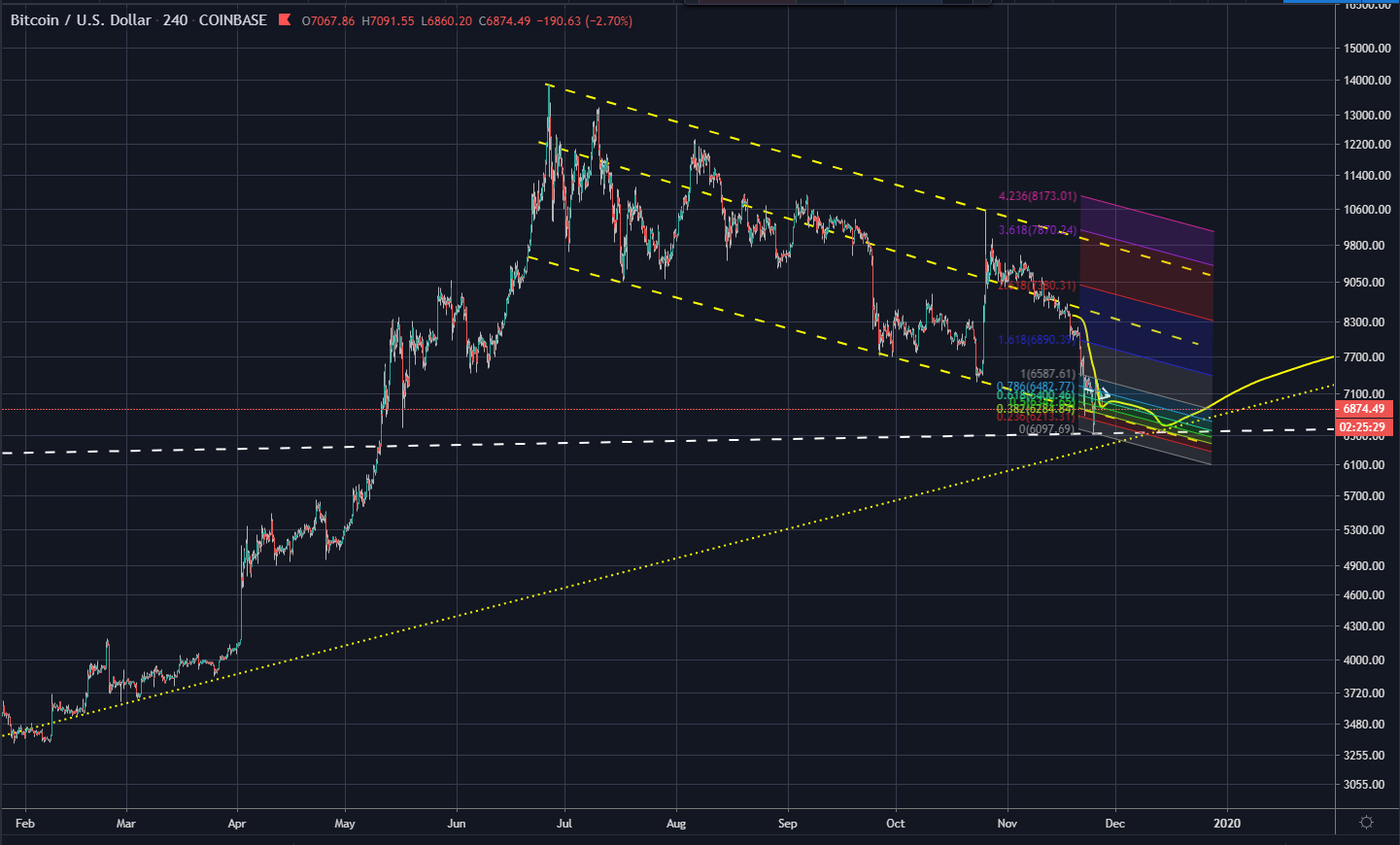 I meant to type this post on Monday, but I was WAY too busy trading. Yesterday my usually quiet family suddenly became super-communicative – ruining my chances of getting a proper post out.

However, here IS a post at last. I believe this post is important to write because – as I often lament – the media is littered with ABSOLUTELY CLUELESS crypto analysis (some purposefully so, some real). I need to set the record straight and to remind people (in the words of the immortal Douglas Adams): “Don’t Panic!”

I need to stress that what has happened to BTC during the last few days is:

If you did not expect it, or if you don’t think it is normal, then I can only shake my head at you and make the universal disappointed clicking noises “tsk tsk”, because it means that you did not listen to Uncle Bit Brain. Maybe next time you will…

When reading and interpreting crypto predictions:

It is important to remember that crypto is inherently unpredictable and that even the best analysts (like me) can’t predict short-term events with a certainty of more than about 60%, even when they are very certain. With that in mind, remember that we WILL get things wrong and that our predictions DO change over time. But also note that the more long-term a prediction is, the higher the chances of it being right. It sounds counter-intuitive, but I can predict BTC prices in 2022 with a much higher certainty than what I can predict BTC prices next week.

Confirmations are vitally important in this game. My regular modus operandi is that usually see a pattern emerge, I wait a day or two for initial confirmation, I publish my idea and then I confirm it with increasing certainty as price movements tie in with my predictions. The confirmation process usually requires the fine-tuning of my predictions or, if they are not working out, abandoning my predictions altogether.

Now that you have the background, let’s look at BTC:

I have long been predicting the movements of BTC which we are seeing now. I’ve been Tweeting about them, blogging about them and displaying my ideas both graphically and in text form.

With this post I aim to set your mind at rest by showing just how far back these predictions go, and also showing you (once again) why you should always listen to Bit Brain…

To keep this post of realistic length, I’ve limited it mainly to graphical Twitter posts, with a few blog charts dotted in between.

The first time I correctly identified and wrote about the BTC descending channel was on 23 July. That’s really not bad (if I do say so myself); it was only this past weekend (four months later) that I first noticed most other analysts at last referring to a descending channel. Some still haven’t realised it… Here is my 23 July chart (from THIS post):

Price movements in early August confirmed the channel, and my faith in it grew (and allowed me to fine-tune it). This chart is from the 5 August post BTC – Beginning of the Week Analysis:

Further mid-August confirmations as BTC rode the top of the channel lower:

At this stage of the game I was still rather optimistic about price, not realising how long the channel would last (it’s now 5 months old, and will probably last for about another month).

September brought us another channel confirmation (with the possibility of turning it into a pennant):

This late September chart is the kind of information that I buy on: a well confirmed trend indicating that prices are relatively low, but can be expected to recover significantly at a later stage. I feel very comfortable placing buy orders based on charts like this:

…so confident that I can even risk missing out on mid-channel dips in favour of better opportunities later (not recommended).

October movements (the next two charts are from THIS post of 24 October) allowed me to modify my channel and to differentiate “Mean Highs” from “Absolute Highs”. Note that my channel has not needed to be modified since then.

Very importantly; October gave me an indicator that the channel was a long-term one and that I shouldn’t expect it to end before the end of 2019. That is still my current thinking.

When BTC dipped through a smaller local channel on 8 November, I was very confident that we would soon be heading down to the bottom of the main channel again. Once again I set buy orders with supreme confidence (note that “65%+”!) and realistic target prices.

Expecting the price drop, I pencilled in a rough sketch of an expected BTC price trajectory. It’s still on my charts today and I’m still using it as a realistic estimate of what may happen.

Which brings us to today:

Everything that is happening is ABSOLUTELY NORMAL and expected. I’m still perfectly happy with the channel and am confident in its long history of predictions and adjustments.

The keen-eyed may have observed that I have just placed my good old diagonal Fib levels on the chart – I believe that they may help a bit in predicting minor resistance/support levels while this channel remains active.

The medium-term chart gives better perspective and introduces a very interesting possibly coincidence/possible important indicator: the convergence of the bottom of the channel, a long-term support/resistance line and the long-term BTC price support line. No I did not cook the books, the lines just worked out that way. The chart after this one better illustrates where the latter two lines come from.

I think there is a very strong possibility that BTC will receive considerable support from the (white dashed) support/resistance line, as well as from the long-term base trendline. that means that BTC should continue to follow my rough little yellow prediction line, and that we should hit 2020 headed in a positive direction.

It also means that we may dip further during the next couple of weeks as the bottom of the channel continues towards lower lows. I expect a final trend reversal in the vicinity of 16 December.