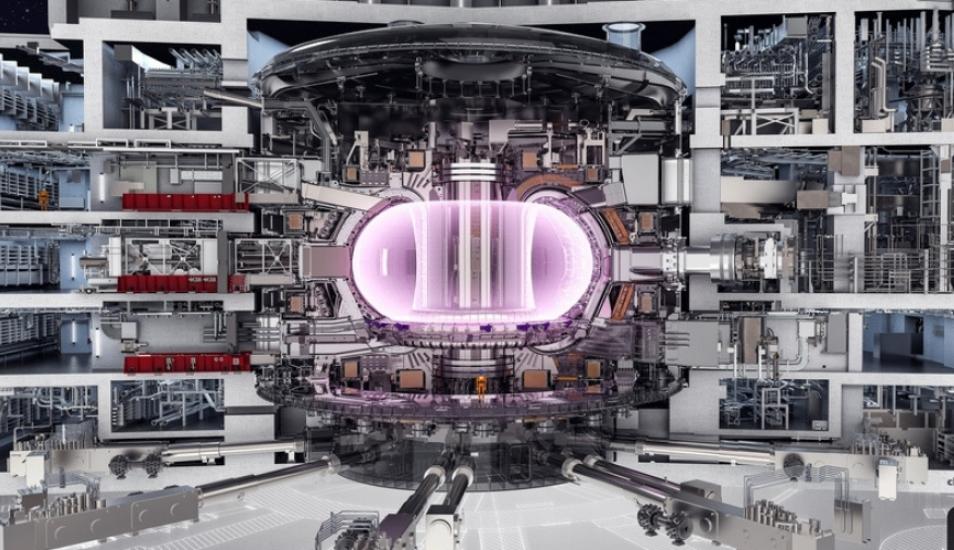 Some of you already know that I am Mechanical Engineer working for one of the most ambitious energy projects in the world today.

This project is called ITER and till today I have dedicated to it more than 8 years of my life.

ITER is an Enormous Experimental Fusion Reactor which is being built in Cadarache, south of France, by an International Team.

To make it short, I would tell you that what we want to do is to reproduce a burning “Sun” (yes, yes, our star) in the earth…and that is only possible by reaching hundreds of thousands of grades of temperature and under a high vacuum conditions…

I am the Interface Project Manager of the Superconducting Magnets Project Team. Magnets are the core of the Fusion Reactor and the most important part of the machine since it will allow us to confine the hot plasma using Powerful Magnetic Fields.

Nowadays, we are ending our first Toroidal Coil (Magnet)… a massive piece 18 meters high, 9 meters wide and 4 meters thick and, more or less 300 Tons of weight…

This last phase of the Magnet Fabrication is being carrying out close to Venice but the components and subassemblies have come from Russia, Japan, Europe, Korea, China, USA etc… so, that’s why I am always travelling to Italy lately but before I was going as well to the other countries… following the production.

The main milestone of the project is called “The First Plasma” and, in theory, it will be the moment on which the machine will be ready, again, in theory, to produce plasma… The target date points towards 2025… I have my doubts about but we are working as slaves in order to finish our part before that date…

Today, at the factory, part of the team and myself have been playing with an scaled model of the TF Coil mounted on its Vacuum Sector…one colleague put his lighter just in the center of the assembly …just emulating the “plasma” that one day will be…

This is a very long project, believe me… but, despite the political problems and technical challenges… we will make it…

Maecenas (Bittrex: ARTBTC) has broken out of the triangle pattern in the daily chart.

Maecenas is a decentralised art gallery auction market, aimed to democratise access to fine art. You can watch their presentation below.

How can I vote? Where is the contest?

You can vote by following this link.

? What drove Vitalik Buterin to decentralization (according to his dad)

Canada is obviously a far cry from Soviet Russia. But it does have strong socialist tendencies, as Dmitry Buterin told early bitcoin adopter Jeff Berwick, in a recent interview. In the video clip, Buterin senior explains that his heritage was key to helping the would-be-entrepreneur look to alternative ways of organising people and ideas, that would ultimately lead him to blockchain.

The father of the 25-year-old boy-genius, Dmitry Buterin, 46, is from oil-rich Chechnya—a region which suffered some of the worst atrocities committed in Russia’s long, authoritarian past.

Buterin senior studied computer science in Moscow before turning serial entrepreneur. He emigrated with his family to Canada, when Vitalik was six, settling in Toronto. But the Soviet experience, during his formative years, has naturally stayed with him.

According to a June 27 press release announcing the new broker-integrated Apex Crypto platform, equity investors will be able to seamlessly open and fund new crypto trading accounts “within minutes” — rather than the purported weeks it would usually take clients to do so.

The briefing was held as part of a broader look at how machine learning and artificial intelligence can limit illicit money laundering and related activities.

? A Wannabe Netflix Raised $575 Million on Ethereum – Then Ditched Crypto

What started as a $575 million token sale is now a rewards program for watching videos.

TaTaTu’s initial coin offering (ICO) was among the biggest of 2018, with film producer Andrea Iervolino raising money from royals like Lady Monika Bacardi, of the famous liquor family. Before this raise, Iervolino was best known for films such as “Bernie The Dolphin” and “Finding Steve McQueen.”

As some token sales start to slowly yield results, TaTaTu offers a prime example of a platform that used “blockchain” as a fundraising technique and then largely moved on.

The TaTaTu project, originally meant to offer a publicly traded cryptocurrency associated with a media streaming platform similar to Netflix, once attracted investment from Ari Paul’s BlockTower Capital (which declined to comment for this article) and movie stars like Johnny Depp (whose representatives did not respond to requests for comment).

San Francisco-based incubator for the blockchain Ethereum Classic (ETC), ETC Labs, has announced that it has partnered with cryptocurrency firm Metronome to create a solution for Ethereum (ETH)/ETC interoperability, in an official blog post on June 27.

Per the announcement, blockchain interoperability—also referred to as “chainhopping”—is a property of a blockchain asset meaning that it can be transferred between separate blockchains. In this case, the cryptocurrency Metronome (MET) will be transferable between the ETH and ETC blockchains.

The ETH and ETC blockchains initially split in the summer of 2016 after a contentious vote to return money lost when The DAO collapsed in 2016.

In the Top 5, the strongest traffic increase came from Venezuela with +9.75% visits!

Find all the analysis and Datas by clicking on this link

The Litecoin Cash block mining reward halves every 840,000 blocks, the coin reward will decrease from 250 to 125 coins.

“We are happy to announce that our platform prototype will be released on June 28th.”

EdenChain Mainnet will be officially launched on June 28th, 2019 (KTS).

Yesterday I was saying that sentence :
” What else to say… imagine now that the BTC will correct, I’m quiet sure that we will break very easly all our support lines. “

Unfortunatly I was more that correct as we are breaking support lines after support lines on the STEEM. It is almost the case on every altcoins but again STEEM is one of the best in correction matter as we didn’t do any up or almost any up during the BTC run but now we are even correcting more than the average of altcoins. What to say… let’s wait better time and hope support line at 0.34$ will hold.

United States-based financial research firm Weiss Ratings announced that it has downgraded its rating of cryptocurrency EOS because of the blockchain’s “serious problems” with centralization. Weiss announced the report in a tweet published on June 7.

In the tweet, Weiss Ratings claims that the cryptocurrency in question has severe centralization issues and that “their event last week did anything to alleviate that,” evidently referring to an event hosted by EOS developer, Block.one on June 1. Weiss decided to lower EOS’ technology score, given the development.

The tweet also hinted that fellow top crypto ADA is next in line to prove itself as a decentralized proof-of-stake (PoS) blockchain system:

“It’s now up to #ADA to launch a truly decentralized #PoS #blockchain. No pressure.”

G20 finance ministers and central bank governors have asked the Financial Stability Board (FSB) and global standard-setting organizations to monitor risks around crypto assets. The request was made in a joint communiqué published on the website of Japan’s Ministry of Finance on June 9, following the G20 meeting held in Fukuoka, Japan.

The leaders that cosigned the document state that they urge relevant institutions to give greater consideration to crypto assets and consider appropriate action:

“We ask the FSB and standard setting bodies to monitor risks and consider work on additional multilateral responses as needed.”

Advances in cryptography are converging to help developers bring blockchain applications closer to the core decentralizing principles on which this technology is founded.

Inventions such as atomic swaps, zk-SNARKS and Lightning-based smart contracts are allowing developers to realize the dream of true peer-to-peer transactions in which neither party, nor an outside intermediary, can act maliciously. Witness the rising number of non-custodial and decentralized exchange (DEX) services for trading crypto assets.

This is exciting. But it also shines a light on another big problem that has curtailed the widespread adoption of cryptocurrency and blockchain technology: secure key management.

For too long, the most reliable means of protecting the private keys that afford the holder control over an underlying crypto asset have been too clunky, insufficiently versatile, or difficult to implement on scale. User experience has been sacrificed in return for security.

? Crypto Debit Cards You Can Use Now Plus a Few to Expect Soon

Debit cards tied to cryptocurrency wallets provide an opportunity to spend your digital coins almost anywhere fiat money is accepted. It’s a working solution, at least until wider adoption comes around. That’s why they’ve become so popular in the crypto community. Challenges of different sorts have negatively affected some of the earlier offerings, but it’s good to see products that have survived and new ones that are gaining traction or are about to enter the market.

During the past year, crypto winter forced businesses to downsize and adjust to unfavorable market and regulatory conditions. Many are still trying to adapt and some are already seeking opportunities elsewhere. For example, the company that issued Shift, arguably the first bitcoin debit card in the U.S. which allowed holders to spend from their Coinbase wallet, is not offering it anymore. It’s now operating under a new brand name, Apto Payments. And in Europe, many card providers suffered a hard blow when Visa terminated Wavecrest’s membership – some have recovered, others are yet to return.

Smart contracts will be enabled on Zilliqa blockchain.

“On Monday, June 10th at 16:00 UTC, validators will vote to upgrade the Stellar Network to Protocol 11!”

Doge Token will be airdropped to Dogecoin holders in 1:10 ratio that register before June 10th 2019.

“Join us for an introduction to three companies building on #Cardano #blockchain, as well as a panel discussion and networking opportunity!”