Frankly, I have doubts about if yesterday’s rise can be ascribed in any Elliot-wave count actually…but it can, of course…

Let’s say that BITCOIN has traced an EXTENDED FIRST WAVE.

In this case, the first wave is the longest wave in 5-wave cycle upwards, it is completed and now is tracing the second wave, a corrective one.

We know that, in EW terms, under this scenario, the third wave cannot be longer than the first but neither can be the shortest wave. And so, the 5th and last wave upwards MUST be the

This is the BTC/USD weekly chart (BITSTAMP Exchange) and Relevant Strength Index Oscillator aka RSI indicator.

What could extract from this chart?

We can see clearly 3 long BEAR MARKETS despite since 2012, Bitcoin has crashed and rise 13 times with many of those falls larger in percentage terms than the latest 2018 correction.

Also, having a look on when the RSI has marked an OVERSOLD condition, it seems evident to discover that the first and the second LONG BEAR MARKETS finished at the very same point on which RSI touched that condition:

Actually if we zoom-in, the BEAR MARKET 2 touched two times

For the moment, BITCOIN is keeping a constant volume around 5.4b$, the “Falling Wedge” pattern still seems to be the more adapted to the current chart.

RSI oscillator moving inside the “safe” zone, nor oversold neither overbought conditions are in play.

As you can see in the chart, an “A-B-C” correction is still on going, last leg, “C” seems to be composed by 5 sub-waves from which the 5th is just in formation. This Five waves are disposed in a Falling Wedge Pattern which, as soon as BTC reaches the vertex , the likelihood of having an upwards movement increases.

I know, I know… I have been searching and telling you about it many times lately…

This is becoming boring…BITCOIN is moving terribly slowly…tracing a downtrend path which does not give us positive feelings right now. But, you know, Volume is the key right now. Volume has decreased a little every day, forming a “Falling Wedge” but, essentially is more or less constant if not flat at 5.5b$

The Bullish Divergence is still there and now BITCOIN is approaching to the upper resistance of this Falling Wedge. This breakage is the key now…

If, while approaching to this line, the Volume spikes then it Another low today, as expected, within the two lines which define the Bull-flag.

BITCOIN touched the lower support of the Bull flag and have entered inside the “Oversold” area of the RSI at the 4h-chart.

The good new is that RSI indication of the last two lows shows a divergence. When prices make lower lows but the oscillator(MACD or RSI are good ones) make higher lows it means just one thing, Next move must be upwards or, better said, it is a Bullish Divergence.

If you enter now (3400 USD), always considering that the upper dashed line is the “resistance” , 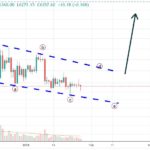 With such a tiny volume is being really difficult to find any indication that show us the next move of BITCOIN and so, the direction of the Market.

The positive view now is that BITCOIN is still within the correction of a first wave within an upwards cycle…hopefully.

BITCOIN may be forming just a long Bull-flag, ending the wave 2 as I show you below: Assuming End of Previous BEAR Market by end of August 2015Fitting and adjusting “Peak to Peak” with the summit of the last Bull (December 18th 2017):

Still a lower low would be expected. “Simulation” of the “Bars Pattern” indicates 2548 USD as the lowest point.A “Consolidation” period of 7 to 8 months would be expected.Start of A Bull Market September 2019322.000 USD by the end of 2021…in the meantime, lots of Dapps, crypto projects and adoption coming…

Will you have the patience to

After more than a week of amazing performance, STEEM has reached the level of the 200 DMA at the STEEM/BTC pair.

Typically, crossing that line would indicate a very good signal of reversal trend.

We have to be very attentive right now.

If STEEM manages to break that 200 DMA, it would be very likely that a higher price will be reached…

Taking into account as well all the positiveness I have now (LoL), I would consider as well the following CUP & HANDLE Pattern another good signal which corroborates the previous one

…As a sort of “guideline”… if this pattern is confirmed,

Finally, BITCOIN has completed the last 5th…and it has been done in a very accelerated way as I wrote yesterday. So high that it all has happened in a matter of 10 minutes. Let me show you the BTC/USD chart in the 5′ timeframe:

As a consequence, watching now the 1h-chart, the movement upwards has over-passed the previous level which indicates that BTC is probably out

Another day of tiny volume, drafting what people is starting to call another “Bart” pattern, this time inverted.
Actually, if we want to be more rigorous with the TA and Pattern Recognition nomenclature this is what is called as Bear Flag… again…
Flags or pennants used to indicate a sudden acceleration of the price, it could be upwards or downwards but, since it is placed at then of a long candle down it is more likely that the acceleration would occur by tthe same direction, downwards…
Also, I feel it must be downwards since the EW-count still has some room to add a